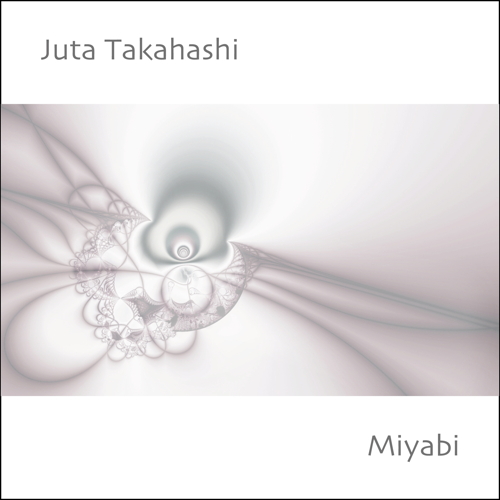 The seventeenth album of Juta Takahashi, "Miyabi", has been released in November, 2021. The album consists of following four long-form ambient tracks.

The digital artwork, "Filigree", for the album jacket by krigl

"Miyabi" is an album containing brand new music after an environmental approach ("Music for Urban Promenades I & II") and a collection of tracks ("Gems"). Gentleness and tranquillity still graces Juta's textural music, a sophisticated blend of electronic and acoustic sounds with ethereal, drifting, and dreamy qualities. The latter elements shine bright on "Stellar Light", while the title track (dedicated to Juta's soulmate) offers rays of elevating, warm soundscapes hovering over a rapid, minimalist piano line. An analogue drone kicks off the minimal "Rêve Lucid" with only a few lush bell sounds and environmental bits surfacing during its 16-minute duration.

The release ends with beautiful 18-minute "Devotions", depicting an ancient Japanese ritual ceremony in the outdoors. It sets out as a touching, most serene ambient piece of gliding textures and piano keys with the space opening up and rays of sunlight entering from the 6-minute mark evoking goosebumps. Rest me to say one should play "Miyabi" when in search for calm, solace, and simple beauty, all presented as attentively rendered long-form ambient.

It's by a peaceful buzzing shadow that the synth expresses its melancholy in the opening of Stellar Light. This ambient movement builds its advance by silent impulses of fixed in the hollow of the movement during its undulation. Rarely has Juta Takahashi's music been as expressive as with his new album MIYABI. Moving as well as soothing, it flows with a purring sound that seems to hum a tune as the piano spreads its notes with the fear of not remembering its melody. But it's more like an idle layer of misty violin that uses a stray note to take flight. And always, these notes fall one by one as the mystical haze floods our senses. Playing on its density and intensity, it draws our attention to that corner of the eyelid that only holds the reality of the moment by a thread. Something has happened in Juta's music! The artist from Japan returns to his earlier symphonies of meditative music by adding a rhythmic element that moves through the intonations of his lighter, less droning layers here, except for Lucid Dream. This new album by the Asian Steve Roach has a disturbing emotional touch that pulls our emotions from the roots of our arms' hairs or our backbone. It's a bit of a rebirth like when the beautiful Albion was released in 2017.
The title-track is a little masterpiece with its piano extending a lively line where two more pensive notes are landing. This dreamy structure is sequenced, creating a minimalist acoustic rhythm that is joined by another ever-vibrant line from the piano. The orchestral haze appears about 30 seconds after the 2nd minute. Dense, it envelops intensely the ascending piano ritornello. To such a point that we forget its presence, concentrated on these orchestrations and this bass line-pulsations which fall some 2 minutes later. Developing with a creative laziness this long lyric river, Juta plays with our emotions. He inserts more passionate synth lines before some great piano beads start tinkling another 2 minutes later. Then we sit down and listen...We listen to this pure marvel making the fortune of our emotions. A superb title my friend Juta! Lucid Dream brings us back in the usual spheres of buzzing ambient music of the Japanese musician. The buzzing is linear with a vibrating effect in its sound mass that follows a long corridor from where arpeggios, organ pads and also discernible but unidentifiable noises escape at times. A real track of dark ambient music. Devotions is another tender gem on MIYABI. Although incisive, its musical texture is less droning with long synth waves adorned with a hazy fluty tone. The piano extends its notes which sparkle in this corrosive universe whose iridescent glares belong to these two elements when they meet. More parsimonious than minimalist, the melody does its work before being terrified by a slamming of metallic doors which takes us out of the torpor around the 6th minute. This impetus from the din gives a second and more orchestral breath to Devotions with atmospheric elements such as a waterfall and the chirpings of fictitious birds. The piano returns with a languidness that makes the sound of its notes lose their sounds in this latent crescendo of orchestrations that reach emotive peaks yo-yoing with that anaesthetizing mist and its inviting steel blue color.
Splendid on the vast majority of its journey, MIYABI is offered in manufactured CD, as well as in downloadable HQ format, in a beautiful sound realization and an artwork that does justice to the music. A magnificent album my dear Juta Takahashi.

"Miyabi" is available as both factory pressed (glass mastered) CD, limited to 100 copies, and digital download.